Welcome to the world of fire-power! At Guthrie's Shooting Range we cater for all, from the accomplished marksman to the querulous beginner. Our range is a full 25 meters in length and can occupy 19 marksmen at a time. Our variety of weaponry will keep even the most trigger happy visitor occupied for hours on end. We have many different categories of firearms for hire. "But I don't know the difference", you say? Here are a few examples of firearm class to help you out: 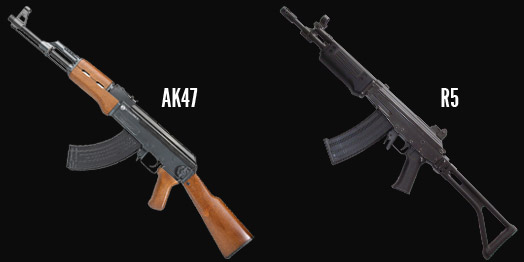 A semi-automatic rifle is a type of rifle that fires a single bullet each time the trigger is pulled, automatically ejects the spent cartridge, chambers a fresh cartridge from its magazine, and is immediately ready to fire another shot. They may be operated by a number of mechanisms, all of which derive their power from the explosion of the powder in the cartridge that also fires the bullet. Historically, the self-loading design was the successor to the repeating rifle, which stored a number of cartridges within the weapon, but required manual action to load a fresh cartridge before each shot. Automatically loading the next round more easily allows for rapid fire. These rifles are also commonly known as self-loading rifles ('SLR') or auto-loading rifles. 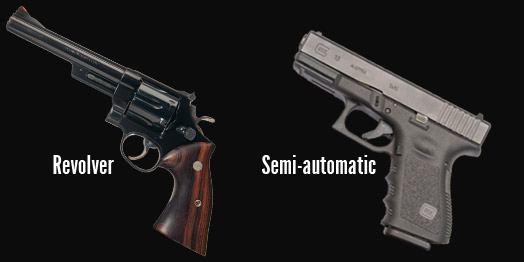 This weapon feed ammunition via the rotation of a cartridge-filled cylinder, in which each cartridge is contained in its own ignition chamber, and is sequentially brought into alignment with the weapon's barrel by a mechanism linked to the weapon's trigger (double-action) or its hammer (single-action). These nominally cylindrical chambers, usually numbering between five and eight depending on the size of the revolver and the size of the cartridge being fired, are bored through the cylinder so that their axes are parallel to the cylinder's axis of rotation; thus, as the cylinder rotates, the chambers revolve about the cylinder's axis.

The semi-automatic pistol uses the energy of one shot to reload the chamber for the next. Typically recoil energy from a fired round is mechanically harnessed. After a round is fired, the pistol will cycle, ejecting the spent casing and chambering a new round from the magazine, allowing another shot to take place immediately.

A shotgun is a firearm that is usually designed to be fired from the shoulder, which uses the energy of a fixed shell to fire a number of small spherical pellets called shot, or a solid projectile called a slug. Shotguns come in a wide variety of sizes, ranging from 5.5 mm (.22 inch) bore up to 5 cm (2 inch) bore, and in a range of firearm operating mechanisms, including breech loading, single-barrelled, double or combination gun, pump-action, bolt, and lever-action, semi-automatic, and even fully automatic variants.

A type of firearm action in which the weapon's bolt is operated manually by the opening and closing of the breech (barrel) with a small handle, most commonly placed on the right-hand side of the weapon (for right-handed users). As the handle is operated, the bolt is unlocked, the breech is opened, the spent shell casing is withdrawn and ejected, the firing pin is cocked (this occurs either on the opening or closing of the bolt, depending on design), and finally a new round/shell (if available) is placed into the breech and the bolt closed.